Captive International surveyed its readers on the top benefit of captive insurance.

Many Americans, especially those who work outside of the insurance industry, think that the single biggest reason to have a captive is to gain tax benefits. This idea became more entrenched when the ceiling for tax deductions on captives was raised to $2.2 million in 2015’s PATH Act.

Interestingly, respondents to this 2019 end of year survey (readers who work in the industry) said tax benefits ranked low among choices for the top benefit.  Instead, nearly half of respondents (45%) said that gaining access to coverage not available elsewhere is the single biggest benefit of having a captive.

About a quarter of respondents said gaining greater control over claims was the biggest benefit. 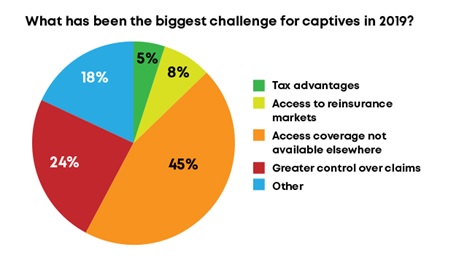 And only 5% cited tax advantages as the number 1 benefit of a captive.

Some respondents argued that it was hard to single out a single top benefit as the true value of captive insurance is “the accumulation of multiple factors, including strategic control of risk finance over a sustained period.”