It is scary to learn that the majority of policy makers do not know what Captive Insurance is and the ways a Captive can aid businesses.  Do you ever wonder if there is anything you can do to stop the propagation of bad information about Captives pushed by critics?

Much has changed in the world of captives taking the 831(b) election since their formation in 1986. The Self-Insurance Institute of America, Inc. (SIIA) plays a major role in shaping the direction of the industry and prioritizes:

SIIA is focused on reducing onerous requirements such as those imposed by Notice 2016-66 and the receipt of IRS letter 6336 and has taken the following steps to address concerns:

The advocacy efforts of SIIA has led to the following accomplishments:

What You Can Do To Help

In an attempt to build upon recent successes, SIIA is asking Captive Owners to consider joining its Advocacy efforts by contacting Ryan Work to setup meetings with Members of Congress to share their stories.  Congress Members want to hear from their constituents, and who is better to educate government officials than those that are utilizing Captives for real risk mitigation in their Companies.  The IRS was under the assumption that many coverages written by Captives insure for risks that are not real; yet here we are in the middle of a pandemic and one of the only coverages responding are Contingent Business Interruption policies issued by Captives.

As Ryan stated during the webinar,

“Doing nothing invites risk and doing nothing in the Captive industry creates issues.  If we do not create the dialog, those in opposition to Captives will fill that silence, which could result in restrictions or worse.  Those in support of Captives must speak out to prevent the loudest voice from being the critics.”

Sandra L. Fenters is a member of Ryan Work’s SIIA Advocacy Committee for the last 3 years.  She has met with many legislators in an attempt to educate them about and advocate for Captives.  It is something Sandra and Capterra feel is necessary and important.  We would love to build our advocacy team with a focus on education so that Congress Members understand the need for Captives and do not simply base their viewpoint solely on what is portrayed by critics. 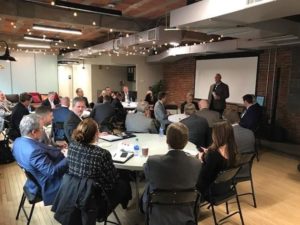 Although the goal is to educate and solve this problem, the reality is that this is an ongoing effort due to the turnover in Congress.  Alone, SIIA cannot reach out to all 450 Members of Congress, but with the help of Captive Owners, we can together build a narrative and reach many more.

If you are interested in telling your Company’s story and helping to educate Members of Congress on the need for Captives, please let us know and we will put you in contact with Ryan Work so that he can aid in setting up a meeting with a Member of Congress or a staffer.

Thank you for considering playing a key role in the future of Captives by aiding with Advocacy efforts.  We hope to work with you in this capacity in the near future.

What Prompted This Communication

The information above was reviewed in a recent webinar Capterra Risk Solutions, LLC participated in on Tuesday, July 21, 2020 titled SIIA Captive Owner Engagement & Policy Update presented by Ryan Work the Vice President of Government Relations for the Self-Insurance Institute of America, Inc. (SIIA).

In summary, the webinar covered the background of SIIA, their goals, approach, and recent activity, a timeline of the past 5 years as it relates to Captives, and an ask for Captive Owners to participate in advocacy and education efforts to engage Members of Congress.   If you would like to view the webinar, please let us know and we will obtain approval to share a link to the recording with you.

On March 20th, just four days after the National Covid-19 Emergency was declared, The IRS sent 150,000 letters to captive insurance companies who take the 831(b) election.

The timing for the IRS could not have been poorer. Despite presenting massive challenges to the global economy, the coronavirus pandemic may well be captive insurance companies’ finest hour. Last week a number of publications highlighted that high severity, low-frequency events like Covid-19 are when captive insurance shows its’ real value in protecting America’s small and mid-sized businesses from disaster.

The Self-Insurance Institute of America (SIIA) wrote to Treasury and IRS on March 30, calling the letters “insensitive and draconian.”

Ryan Work, SIIA VP of Government Relations who leads the SIIA Advocacy Committee on which I am very active, requested that the IRS reconsider its letter and its timeframes given the crisis.

Given the current crisis, combined with the timing and the burden being placed on small- and medium-sized businesses, the IRS should suspend further audit activity until the National COVID-19 Emergency Declaration is withdrawn so as to allow businesses operating captive insurance to mitigate the risks that Congress and the Tax Code allow them to appropriately address. Furthermore, while the deadline is suspended, the overall need for the IRS Letter itself should be reconsidered and information clarified as it is possible for the IRS to deduce the answers to its own questions from information that has already been reported by taxpayers who have complied with the requirement to file Form 8886 over the past two years.

Here is a link to the full SIIA letter to Treasury Secretary Mnuchin and IRS Commissioner Rettig.

We are hopeful that captive insurance companies play a pivotal role in covering losses in the coming months of the pandemic and that the IRS recognizes their critical and legitimate role in mitigating risk not properly covered by other insurance products.