Captive International surveyed its readers about which business lines they expect to see captives increase their activities in for 2020 (respondents were permitted toselect multiple answers).

Cyber coverage came in first, with 64 percent of respondents predicting captives will increase their activities in that area.

Directors and officers (55 percent) and general liability (53%) were the next most popular choices, followed by professional liability (38%) and catastrophe (35%).

Notably, workers’ compensation, which is one of the lines most closely associated with captives, was only selected by 12 percent of respondents. It is likely that captives which need this coverage are likely already writing it. 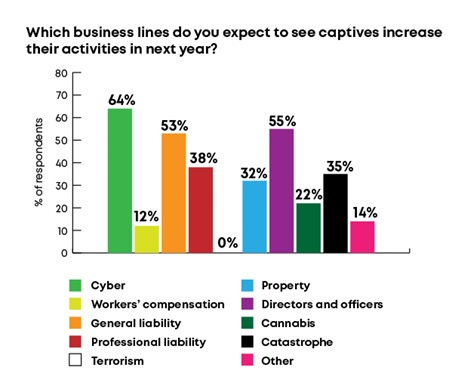 There has been a lot of discussion about captive coverage for cannabis growers, only 22 percent saw this as a growth area for captives next year.

Many of the respondents to the survey said their focus will be on areas with the biggest rate rises in 2020 making the question, in effect, a prediction about where rates will rise.